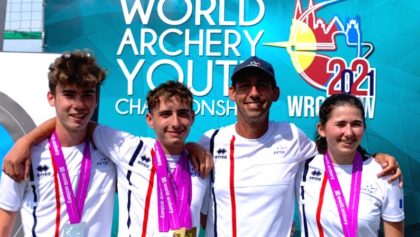 Jérôme Auraix, head of the archery centre at the CREPS in Bordeaux, gives us his views on new technologies for top-level sport. Equipped with two autonomous systems for its new James L. Easton training space, inaugurated on January 22, 2020, the French Archery Centre has adopted our InoPerf video capture solutions for the daily training of its athletes.

Hello Jérôme, first of all congratulations for the excellent results of your athletes, especially during the European Junior Cup and the World Cup. Can you give details of their performance ?

Indeed, this year we won 28 medals in all the international competitions of the season ! This was a good omen for the future as these events were preparatory competitions for the World Championship. We were able to get results in these competitions that projected a potentially interesting world championship, which was the case ! As a result, we obtained a World Under-18 Championship title through Iban Bariteaud. A very good performance as he was able to dominate the season from the first Junior Cup to the World Championship. This athlete actually won 3 medals. He won a silver medal in the team event with his colleague Yanis Baudain, but also a bronze medal in mixed doubles, the new category of the discipline recently introduced at the Tokyo Olympics. Besides that, we had a title in the women’s U18 category, with Amélie Cordeau who is the world team champion.

Archery is a discipline culturally familiar with performance optimisation through video, how do you explain this ?

We are in a sport where the objective is to reproduce a gesture in a precise and regular way, so what could be better than to be able to see the reality of what we produce on video. At the level of the young people at the Pôle France, we are looking for autonomy in their work and precision in their technical movements. We try to automate technical gestures that are most related to the idea we have of how to put an arrow in the centre of the target. And so, of course, video is an undeniable plus !

So you are in charge of the archery centre at the CREPS in Bordeaux, equipped with our InoPerfsolution, how would you define it ?

It is a solution that we wanted to be as easy to use as possible, as it should allow young archers to handle it independently. Even though today, with the evolution of the generation, young people are very familiar with the use of computers and other digital solutions. It also had to be mobile and space-saving, as it could not stay in the middle of the shooting range forever. So you need to be able to move it and store it in one place to make room for different working groups. Mobility and ease of use have guided the development of this tool.

How do you use it ? And what are the benefits ?

We use it daily especially in the winter period, from September to December, when we do a lot of technical remediation. We have two positions on the structure which means two archers training at the same time with or without the presence of the coach. Both can be done. As we have seven archers in training, the InoPerftool is used daily.

For me, the benefits are to duplicate my work as I am the only coach on the structure. This process allows me to act as if we were three coaches. I have two stations that work plus myself who follows either on one of the stations or in individual work on another workshop. In short, it really simplifies my daily work.

How are your archers adapting to InoPerf?

They have adapted well, the use of InoPerfis quite intuitive. The navigation pages allow us to easily access either the live or the video or the manual recording. Our training routines are regularly done with the live deferred feature, the archers watch each other shoot after releasing the arrow. For them, this allowed them to quickly work independently and to appropriate the tool. They have the opportunity to train with an awareness of what they are doing and not just to shoot arrows without defined goals.

What potential improvements do you see for this system?

On the one hand, at the software level, on the part of a posteriori viewing of a video that has been recorded, what would be interesting would be to have the possibility of navigating more easily on the video itself with slow motion. The use of a scroll wheel to drag an image and come up with specific aspects of the gestures could also make sense. On the recovery of the images, we go through the server. It is therefore necessary to rework the data, which requires me to get to grips with it. Perhaps it would be more clever to put it on USB sticks that the athletes would keep with them. We are also working with the grid, which is a feature to better visualise the precision of the movements. It allows straight lines to be superimposed on the background image for reference purposes. Finally, a reorganisation of the camera displays could be envisaged, starting with the image of the target camera to have the impact of the arrow as the first visual.

As far as equipment is concerned, InoPerfis satisfactory, and I recommended it to the trainer at the CREPS in Nancy who had asked me about the product !

In a few words, how would you sum up the collaboration with E-NOVON ?

What characterises the relationship is listening. I am in close contact with the people who manage the project. They are really responsive in providing solutions. And anyway, as we work with InoPerfon a daily basis, we need to be responsive. If the equipment malfunctions, I can’t afford to be without video for more than a week. So I appreciate the availability which is really a strong point at E-NOVON.

Finally, what are your next sporting objectives?

So they vary according to levels and age categories. I have under 18s, under 21s and seniors. For the latter, it will be to win their places to go to the European championships and start taking the steps towards the Paris 2024 Olympic Games. For the juniors, it will also be to go and confront the seniors because there are young people who have a very good level. I mentioned earlier that there are world champions. It is therefore conceivable that by moving from the cadet world champion to the junior category, they will have the ability to challenge their elders. They all have different levels of objectives, but which may at some point intersect in terms of the potential they have!

Thanks Jérôme and see you soon! 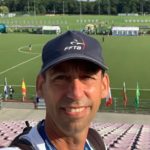 Jérôme Auraix – Head of the Archery Centre at CREPS Bordeaux

Video is the flagship product of our range (InoWys), it is a service that has…

The White Label, a marketing process adapted to sports centres!

⚪ LA WHITE LABEL ⚪ This marketing process is the hallmark of E-NOVON, and one…